“The latest survey shows the market continued to grow at the end of last year, with mortgage activity for first-time buyers, home movers and remortgagers in Northern Ireland all showing big increases from the same quarter last year. This shows that the market has not only remained resilient but demand has increased, even in the face of uncertainty caused by the Brexit process and the perceived impact this has had on the overall pace of economic growth.

“The market growth has been reflected in Danske Bank’s own financial results for the year, which showed a 26 per cent uplift in new to bank mortgage lending across all borrower types.

“The first-time buyer market continues to demonstrate sustained momentum, with activity in the quarter up 11.5 per cent year on year to a 14-year high. Danske Bank has played a big part in this growth, with the bank now lending to one in four of all first-time buyers in Northern Ireland. The competitive deals on offer from lenders and increased investment from housebuilders in new housing stock, have contributed to this sustained growth in the first-time buyer market.

“It is encouraging that we have also seen a marked increase in the number and value of home mover mortgages and homeowner remortgages in Northern Ireland compared with the same quarter last year, with both segments of the market rising to their highest levels in several years. We believe there is still room for further growth in this part of the market in 2019 as more fixed rate loans come to an end.

“Given the ongoing uncertainty over what the Bank of England will do next with interest rates, there continues to be demand for new fixed rate mortgages, helped by the fact that most lenders now also offer the flexibility of overpaying during the terms of those mortgages. 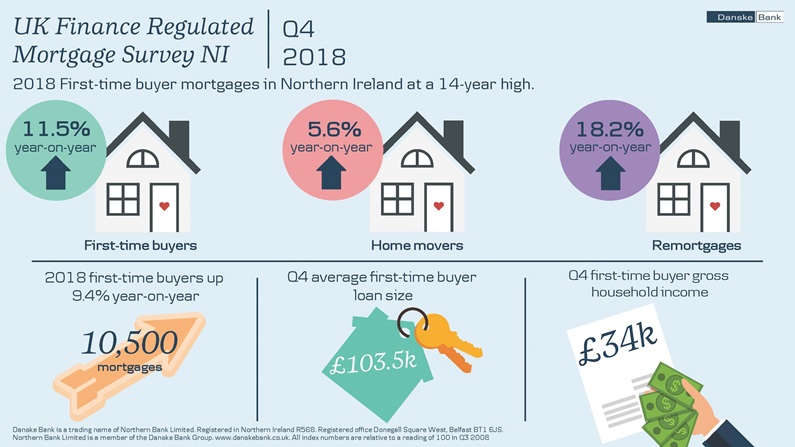