Commenting on the figures Patrick Mullan, Head of Mortgages at Danske Bank, said:

“This survey continues to show there is positive momentum in the market, with mortgage activity for first time buyers, home movers and remortgagers in Northern Ireland all up on the same quarter last year.

“This was reflected in Danske Bank’s own figures, which showed a 35 per cent uplift in new to bank mortgage lending in the first quarter when compared with a year ago, across all buyer types.

“The first time buyer market once again demonstrated strong and sustained growth during the quarter with growth of 10 per cent. There is clearly still some pent up demand driving the first time buyer market, not to mention a lot of competition between lenders offering a wide choice of mortgage deals. There is also more housing stock becoming available, in part due to an encouraging upturn in new build activity.

“There is also competition in the remortgage market and while we are still in a very low interest rate environment, we expect further growth in this market, as homeowners look for a good deal in the near term. Danske Bank launched a new Helping Hand incentive to encourage remortgage activity earlier this month and we are excited to see how it will progress.

“The Bank of England didn’t raise interest rates in May as had been expected, but Governor Mark Carney has indicated that he still expects some rate rises this year,

“In all segments of the market, we have been seeing more people take out fixed rate mortgages. We have also seen increased demand for 5 year fixed mortgages rather than shorter 2- year deals, which suggests homebuyers and owners are preparing for further interest rate rises in 2018.

“While the economic outlook is for steady rather than spectacular growth, this survey indicates the housing market in Northern Ireland is in good health. The NI market has enjoyed the strongest start to the year of any region of the UK but while prices are rising, affordability measures still compare favourably to the UK average, so there is capacity for further sustainable growth in NI this year.” 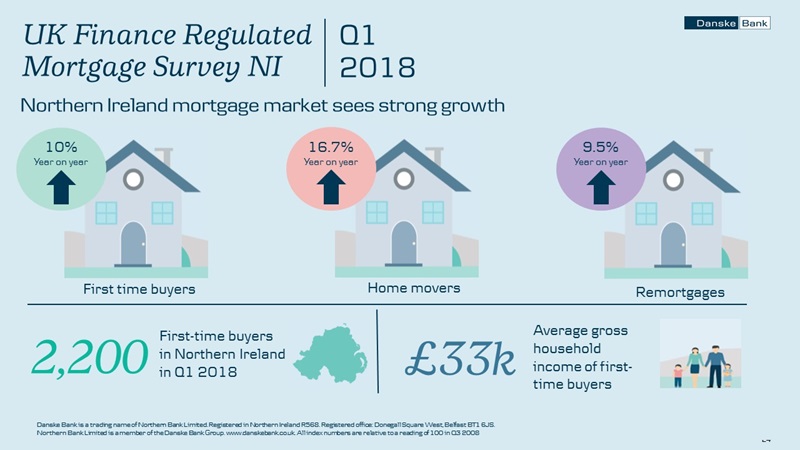