Over the last 20 years, local productivity levels – or the level of output produced during an hour of work – have averaged close to 20 per cent below those in the UK.

The impact of this cannot be underestimated as productivity is a key driver of economic growth, wage increases and living standards.

He said: “Productivity isn’t everything, but in the long run it is almost everything. A country’s ability to improve its standard of living over time depends almost entirely on its ability to raise its output per worker.”

Here are three findings which seemed significant to me. 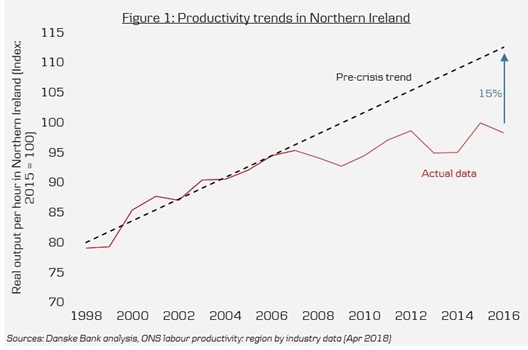 2. In both high and low productivity sectors, Northern Ireland’s output per hour lags behind the other UK regions
In Northern Ireland, local productivity levels in 2016 were highest in the real estate, financial services, public administration and manufacturing sectors. However, real estate numbers are very high due to how the national accounts data is compiled, so it is better to focus on the other sectors mentioned.

While it is positive to see sectors like financial services and manufacturing, which can be considered high productivity sectors, near the top of the list, we still ranked in the bottom half for the level of productivity in these industries when compared with the other regions of the UK. Another sector which can be considered a relatively high productivity industry is information and communication. However, Northern Ireland had the lowest output per hour of all the UK regions in this sector in 2016.

The sectors with the lowest productivity levels in the local economy were administration and support, hotels and catering and arts, entertainment and recreational activities. While these sectors are normally considered to be relatively low productivity sectors, Northern Ireland again sat well behind most of the other UK regions when it came to output per hour in each of these industries in 2016.

3. In productivity growth terms, there’s room for improvement across all sectors
Productivity growth across the sectors has been quite volatile in recent years, so I have looked at the average annual rate of real output per hour growth to estimate which sectors experienced the strongest and weakest productivity growth performance between 2008 and 2016 (see Figure 2).

One disappointment is the relatively weak performance of sectors such as information and communication (0.3 per cent), finance and insurance (-0.2 per cent) and professional, scientific and technical services (-1.3 per cent).

Given that only the wholesale and retail trade sector experienced average productivity growth of above 2 per cent and no industries witnessed growth above 3 per cent, there is undoubtedly room for improvement across the board. 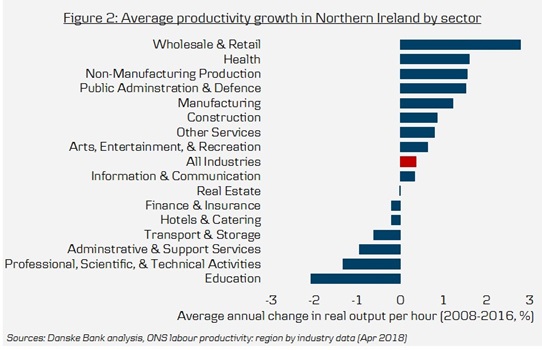 Unfortunately, there is no silver bullet solution to improving a country’s productivity performance. Tackling the issue requires a multi-pronged policy response which needs to include investing in skills and infrastructure, encouraging businesses to spend more on research and development activities and companies increasing their activity in global markets.

Given the extent of Northern Ireland’s productivity problem, boosting performance in this area needs to be a priority.

Want to get in touch?

Use our Mobile Business App

Danske Bank’s use of cookies and processing of personal data

We use data from our own cookies and from third-party cookies. We use cookies and process personal data for the purpose of remembering your settings, improving our services, measuring traffic, showing you relevant messages (including profiling) and tracking your use of our website. You can choose to accept our use of all cookies, our use of functional, statistical and marketing cookies or our use of necessary cookies only. Your consent covers the use of both cookies and the associated processing of personal data. To get more information, click use of cookies and processing of personal data. To read more about how to revoke your consent, click the cookie guidelines link at the bottom of our website.